8 Fenugreek Benefits, Including for the Gut, Lungs & More

8 Fenugreek Benefits, Including for the Gut, Lungs & More
admin
News & Events, Organic Foods
0 Comment
Never heard of fenugreek? Don’t worry — you’re not alone — but that doesn’t mean you should continue to be in the dark on this medicinal herb. In fact, I recommend using fenugreek on a regular basis.

Why? Because fenugreek has some amazing health benefits that could transform your health and change your life for the better. How? It all starts with inflammation. As recent research shows, fenugreek helps reduce both internal and external inflammation … in addition to improving your sex life and reproductive function, as well as enhance nutrition for babies!
And that’s just the tip of the iceberg when it comes to this important herb.

Fenugreek is an annual herb with light green leaves and small white flowers. It’s of the pea family (Fabaceae) and also known as Greek hay (Trigonella foenum-graecum). The fenugreek plant grows to about two to three feet tall, and the seed pods contain 10–20 small, flat, yellow-brown, pungent and aromatic seeds.

Fenugreek seeds have a somewhat bitter taste, similar to celery, maple syrup or burnt sugar, and are often used to make medicine. However, fenugreek has a far more pleasant taste when cooked. The graecum seeds, which are usually dried and ground, are the most widely used part of fenugreek. The leaves are often used in cooking as well.

Fenugreek can be taken by mouth or used to form a paste that’s applied to the skin to help heal inflammation. In manufacturing, fenugreek extracts can be found in soaps and cosmetics.

As noted in the book “Essential Oils in Food Preservation, Flavor and Safety,” fenugreek extract and oil are known to possess antimicrobial, antioxidant, antidiabetic and antitumorigenic activities. Cultivated in North Africa, the Middle East, Egypt and India, it has a long history as an ingredient in traditional medicine. The T. foenum-graecum galactomannan acts as a gum and an emulsifier, making it useful as a stabilizer as well as thickening agent for food. It’s also used as a spice and flavoring agent in food preparation. 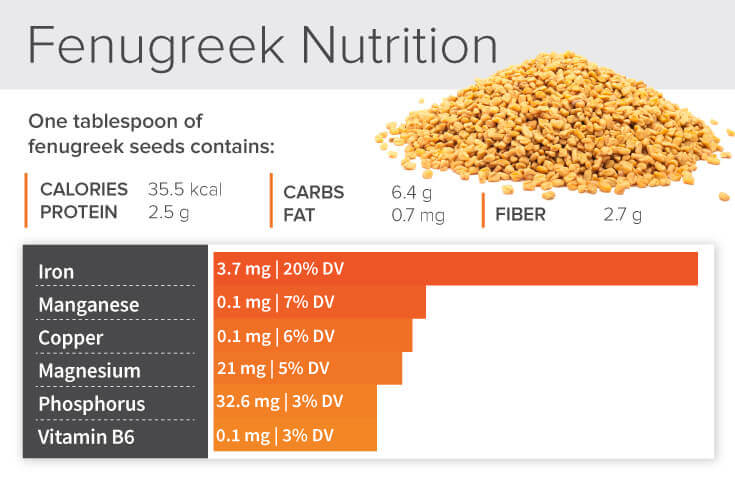 While more research is needed in terms of identifying and confirming all of the its benefits, fenugreek is shown to help with numerous health issues. Here are eight of the most proven fenugreek benefits.

Fenugreek may help with numerous digestive problems, such as upset stomach, constipation and inflammation of the stomach. For instance, the water-soluble fiber in fenugreek, among other foods, helps relieve constipation. (1) It also works to treat digestion and is often incorporated in an ulcerative colitis diet treatment plan due to its anti-inflammatory effects. (2)

Fenugreek also seems to benefit those with heart conditions, such as hardening of the arteries and high blood levels of certain fats, including cholesterol and triglycerides. It also shows potential for helping those who are diabetic. In fact, a study out of India showed that administering 2.5 grams of fenugreek twice daily for three months to people dealing with non-insulin-dependent diabetes mellitus significantly lowered cholesterol naturally, along with triglycerides, without affecting HDL cholesterol. (3)

2. Reduces Inflammation Inside the Body

Fenugreek helps with inflammation within the body, such as:

According to Dr. Richard Palmquist, chief of integrative health services at Centinela Animal Hospital in Inglewood, Calif., fenugreek was discovered to have medicinal qualities thousands of years ago by Ayurvedic medicine practitioners. Thought to lower blood sugar, he reports it’s useful for many things, including management of metabolic and nutritive disorders such as diabetes. (4)

Fenugreek appears to slow absorption of sugars in the stomach and stimulate insulin. In traditional Chinese medicine (TCM), the spice is known as a “phlegm mover” and is said to break up stuck energies and cool inflammation within the body.

Some fenugreek uses for men include treating hernias, erectile dysfunctionand other male problems, such as baldness. That’s because fenugreek may increase sexual arousal and testosterone levels.

While it’s best to consult with a physician before using natural therapies for treating illnesses or improving sexual performance, supplements produced from fenugreek have been shown to increase sexual desire and performance in men, as well as naturally remedy impotence.

In a study published in Phytotherapy Research, 60 men between the ages of 25 and 52 years with no history of erectile dysfunction were supplemented with either a placebo or 600 milligrams of fenugreek extract per day for six weeks. Through self-evaluation, the participants noted their results with fenugreek, reporting that the fenugreek dietary supplement had a positive effect on their libidos. Ultimately, the study found that fenugreek extract had a significant influence on sexual arousal, energy and stamina and helped participants maintain normal testosterone levels. (6)

Fenugreek also helps breastfeeding women who may experience low milk supply. Fenugreek can increase a woman’s breast milk supply because it acts as a galactagogue. Galactagogues are substances that help with increasing milk supply. This stimulates the milk ducts and can increase milk production in as little as 24 hours.

While more research is needed to determine the exact efficacy and safety of  fenugreek on breastfeeding, several studies note its use in promoting milk flow. Complementary & Alternative Medicine, the Annals of Pharmocotherapy, Journal of Pharmacy and Pharmaceutical Sciences and Veterinary Medicine International, among others, have all published studies on this issue. (7, 8, 9, 10)

5. Lowers Inflammation from Outside the Body

It’s important to test the area first to ensure that it does not burn or further inflame, however.

6. Adds Flavor and Spice to Food

In foods, fenugreek is often included as an ingredient in spice blends, mostly found in Indian fare, such as curried dishes. It’s also used as a flavoring agent in imitation maple syrup, foods, beverages and tobacco. (12) The leaves from the plant can be used in salads, and both fresh and dried leaves are used in Indian cookery.

Beyond enhancing flavor, fenugreek has been shown to increase appetite, which results in restorative and nutritive properties. A study published in Pharmacology Biochemistry, and Behavior was designed to investigate the effects of a fenugreek seed extract on feeding behavior. Experiments were performed to determine food consumption and motivation to eat, as well as metabolic-endocrine changes.

The results showed that chronic oral administration of the fenugreek extract significantly increased food intake and the motivation to eat. The report also indicated, however, that the treatment does not prevent anorexia nor the decreased motivation to eat. (13)

In cases of anorexia nervosa, the University of Maryland Medical Center recommends taking 250 to 500 milligrams of fenugreek up to three times a day, but it may not be safe for children — so as with any medication or natural treatments, check with your doctor first.

The Journal of Sports Science and Medicine reports a study of the effects of combined creatine and fenugreek extract supplementation on strength and body composition in men. Forty-seven resistance-trained men were divided into two groups according to body weight. Each group then took either 70 grams of a dextrose placebo, 5 grams of creatine and 70 grams of dextrose, or 3.5 grams of creatine and 900 milligrams of fenugreek extract and participated in a four-day a week periodized resistance-training program for eight weeks.

Body composition, muscular strength endurance and anaerobic capacity of participants was tested. The creatine/fenugreek group showed significant increases in lean mass, bench press and leg press strength. The study concluded that creatine combined with fenugreek extract supplementation had a significant impact on upper body strength and body composition as effectively as the combination of  creatine with dextrose. (14)

Why is this good? The use of fenugreek with creatine supplementation may be an effective means for enhancing creatine uptake while eliminating the need for excessive amounts of simple carbohydrates, so you may want to consider adding fenugreek to your list of best foods for athletes.

Fenugreek has a long history as both a culinary and medicinal herb in the ancient world. It was one of the spices the Egyptians used for embalming, and the Greeks and Romans used it for cattle fodder, which is where the Latin foenum graecum, meaning “Greek hay,” originated. It also was grown extensively in the imperial gardens of Charlemagne. The first recorded use of fenugreek is described on an ancient Egyptian papyrus dated as far back as 1500 B.C.

Fenugreek is native to southern Europe, the Mediterranean region and Western Asia. It’s cultivated from western Europe to China for the aromatic seeds and is still grown for fodder in parts of Europe and northern Africa. Fenugreek is an indispensable ingredient in Indian curries.

Fenugreek seed is commonly used in cooking, and, historically, fenugreek was used for a variety of health conditions, including for menopause relief and digestive problems. It was also used for inducing childbirth.

Today, fenugreek is used as a folk or traditional remedy for diabetes and loss of appetite, as well as to stimulate milk production in breastfeeding women. It’s also applied to the skin for inflammation among numerous other possible benefits.

Here are some great fenugreek recipes that you can try as well as some ideas for women who are breastfeeding or experiencing engorgement.

Chicken and Mushroom Masala with Fenugreek, Turmeric and Curry

There are a few possible fenugreek side effects. When taken by mouth, it may cause gas, bloating and diarrhea. Fenugreek also can cause irritation when applied directly to the skin, so always test a small area first.

Even though fenugreek has been used for inducing childbirth, women should always use caution when taking fenugreek during pregnancy. Make sure you talk to your health care provider about fenugreek prior to use.

It’s also important to note that fenugreek could cause harmful effects that can thin the blood and cause excessive bleeding in some people. Those with underlying bleeding disorders or who take blood-thinning medications or anticoagulants should not take fenugreek without their doctors’ approval. Signs of excessive bleeding include easy bruising, vomiting blood or passing dark stools.